As I stared into the steaming hot bowl of instant clear soup, colorful flowers and hearts gently floated to the top, and I was transported back to beautiful Kanazawa, where I traveled in July on a pilgrimage to learn more about a traditional wheat gluten called “fu.”

Kanazawa is a city of samurai culture. The historic capital of the Hokuriku region, Kanazawa’s unique aesthetic sense and food culture flourished as a castle town of the famously prosperous Kaga domain, ruled over by the Maeda clan.

When I arrived at JR Kanazawa Station, I was met by Hiroyuki Tsuchida, Sales Manager of Fumuro-ya.

Founded in 1865, Fumuro-ya is a foremost authority in fu, particularly the traditional Kaga-fu that originated in the Kanazawa area. Building on this traditional pedigree, they have in recent years also been pioneering the development of new products, such as instant osuimono soup, and exploring cross-cultural culinary fusions in the hopes of sharing the traditional Japanese ingredient with the world.

Kanazawa Station has become a highly regarded architectural landmark, given its majestic appearance with a huge drum gate and glass ceiling dome that resemble the drum of Noh theatre. Before the spread of the coronavirus, the station was crowded with tourists buying souvenirs, and Fumuro-ya’s products were selling well. But since the pandemic, there have been far less tourists. I visited the Fumuro-ya cafe located inside the station.

In essence, fu is primarily gluten, produced by kneading wheat flour with water. It can be dry-baked to make yaki-fu (baked fu) that goes well with soups or combined with mochi rice flour and steamed to make glutinous nama-fu (raw fu).

Fu has a long history in Japan. It was first imported during the Tang Dynasty, along with Buddhism. During the Kamakura era (1185-1333), it became a staple source of protein in the vegetarian “shojin ryori” cuisine that sustained monks who did not eat meat. By the Edo era (1603-1868), fu could be found on the dinner tables of commoners in Kyoto, from where it spread to Kanazawa, which was thoroughly influenced by the old capital’s cultural sphere.

Tsuchida said that while fu has not quite been seen as the star of a dish, it has long played a strong supporting role. Drawing on the parallel to Noh, perhaps you could say that fu is equivalent to the supporting “waki” actor, who enhances the performance of the lead.

“You might not miss fu in dishes where meat or fish is the main attraction, but it’s something that people are always glad to have,” Tsuchida explained. “It adds color to the dish and makes you feel happy.”

A convenient way to eat fu is through Fumuro-ya’s signature product, “takara-fu” (treasure fu). When you open the packet, you will find a small, box-shaped “fuyaki” and kombu dashi soup powder. Fuyaki is a baked fu filled with more fu, wakame seaweed, and green onions. Put the soup powder in a bowl, gently press the center of the fuyaki with your fingertips to make a hole, pour boiling water atop, and watch as the ingredients emerge in a cascade of color. When I stirred the bowl, pink and yellow fu in the shape of flowers appeared. In no time at all, I had a gorgeous osuimono soup. The fu absorbed the broth, becoming soft and moist, as a nice aroma wafted up to my nose.

Tsuchida shared the story behind the origins of Takara-fu.

“Yasuaki Fumuro, the sixth president of Fumuro-ya, studied in France when he was young, and his brother Hideaki studied in the United States. Their mother packed dried vegetables and other ingredients into fuyaki and sent them to her children along with powdered dashi soup blended with Kanazawa-style flavors so that they could easily enjoy Japanese tastes even when they were abroad. Other people agreed that they had a hit on their hands, and they turned it into a product in 1990.”

Fumuro-ya has been actively dreaming up new uses of fu to entice modern palates, even opening a sweets parlor to showcase the surprising versatility of an ingredient that has long been associated more with traditional Japanese cuisine than, say, ice cream.

Before the interview, I stopped by the Fumuro-ya Cafe in the Daiwa department store to try their parfait. The very Instagram-worthy concoction was served in an elegant glass piled high with little clouds of shiratama-fu, pastel-colored temari-fu, and snack fu atop a base of soy ice cream, ogura-an (sweet red bean paste), and kuromitsu syrup.

It was the first time I had eaten fu in this way, and it was a refreshing experience.

I also ordered the “Kuruma-fu French toast,” a doughnut-like piece of fu in the middle of a large plate, served with maple syrup and whipped cream. The fu French toast had the moderate springiness of baguette and a delicious taste. It was an incongruous yet pleasantly surprising combination, that didn’t feel heavy in the stomach after eating.

It is a big leap from Buddhist temples to chic cafe.

The idea to create a dessert menu using fu came from President Fumuro, who trained in France as a patissier and also worked in a French restaurant.

Such innovations are representative of Fumuro-ya’s ambition to share fu with a wider audience.

“I am confident that fu can add color to dinner tables all over the world,” Tsuchida said. “I hope everyone tries this versatile ingredient from Japan that can play a supporting role in any dish.”

They also hope these new proposals will help reverse the fu’s fall from favor in Japan.

As Tsuchida explained: “In Kanazawa, fu used to be enjoyed on a daily basis in every household. Although people under 60 used to eat fu served at home, they would rarely prepare it themselves, so the younger generation isn’t familiar with fu at all.”

Fumuro-ya has turned to social media in order to close this generational divide.

Tsuchida took me to the company’s factories, which are about a 20-minute drive from Kanazawa Station. Fumuro-ya built two new factories in close proximity to each other, when it came time to retire their former plant. The first factory was completed about fourteen years ago, and the second about two years ago. Both are operated under exacting hygiene controls, so we had to don disposable work clothes, hats, shoes and masks before passing through a sterilizing air shower room and entering the work floor.

The first factory handles Fumuro-ya’s traditional fare, such as colorful raw-fu and baked-fu. The second factory is responsible for takara-fu, the company’s main product, accounting for 70% of Fumuro-ya’s sales. About 40 female employees could be seen busily working in the spacious factory, divided into many different sections for each of the steps that go into making the instant treat. At present, Fumuro-ya offers more than 20 kinds of takara-fu, and each product has different ingredients for fillings, so the production process is very detailed.

Before these products reach the production line, they must first pass President Fumuro’s strict review. Tsuchida said: “The development team goes through a long trial and error process. They could be 95% confident about the prototypes when they give the president a taste, but when it comes time for the verdict, he will say it earned an 80%. That’s still a passing grade. But nobody else in the company has taste buds that can tell the difference [between that 15%].”

Fumuro, who is rarely interviewed by the media, is a master craftsman at heart with a delicate palate. Not only is he very particular about taste, but he also eats Fumuro-ya’s products on a daily basis, to make sure the quality remains up to his standards.

Although Fumuro-ya values tradition, it is also constantly tinkering with its recipes in order to keep up with changing tastes and dietary demands. For example, takara-fu has been recalibrated over ten times since its debut to adjust the soup powder and ingredients in the fuyaki box. The parfait was also renewed two years ago, when it outgrew the dainty wine glass it used to be served in, and was scaled up with new ingredients. “Of all the items served at our restaurants, there are only a few such as curry whose recipe have not changed,” Tsuchida said. “We’re passionate we are about what we do, so can have absolute confidence in the taste.” 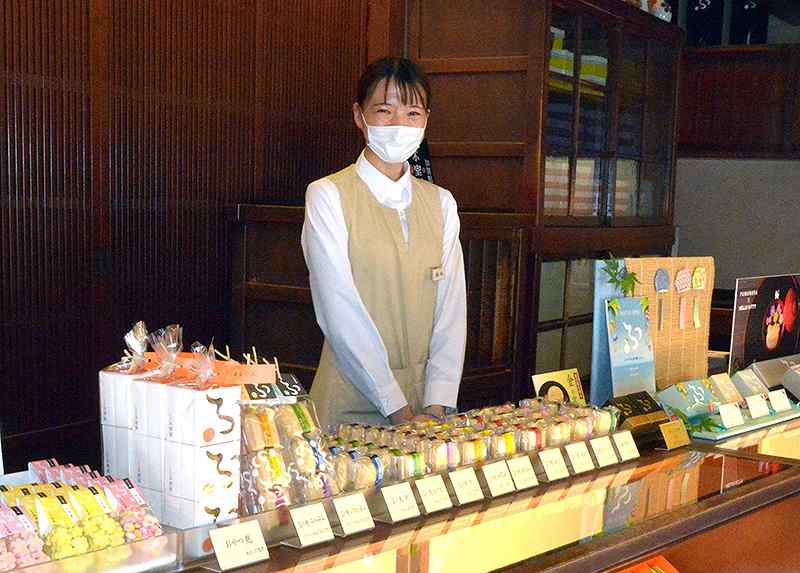 Young women dressed in kimonos stroll along Higashi Chaya Street, where the atmosphere of the Edo era has been preserved in the olden district of Kanazawa. I visited Fumuro-ya’s nearby Owari-cho branch shop, which stands on the site where the company was founded. The Owari-cho shop is housed in an elegant old building that is only half the size of the original, pared down to make way for a road-widening project.

There is a well in the shop, and in the old days they used to pull sudare-fu directly from the well water and sell it fresh to customers. The name “sudare-fu” derives from how the dough is wrapped in a bamboo screen (sudare) and boiled. Although gray in color and rather inconspicuous on its own, sudare-fu absorbs broth and dashi very well, so is an old standby often used for sukiyaki in Kanazawa.

There is one major difference between fu found in Kanazawa and Kyoto. In Kyoto, colorful fu was developed to befit the glamorous tastes of the courtly old capital.

By contrast, Kanazawa’s fu grew out of the culture of samurai frugality and simplicity that took root in the time of the Kaga clan, careful to avoid upstaging the Edo shogunate.

“Evidently, colorful Kaga-fu was not widely popularized until the Meiji and Taisho eras,” Tsuchida said.

As a company, Fumuro-ya’s mission has been to “contribute to food culture based on elegance and tradition.” In service of this guiding philosophy, they actively seek to create new products out of useful techniques, tastes, and tricks of the trade cultivated over the decades. However, they pride themselves on having a corporate culture that embraces change. Just because something has always been done a certain way, doesn’t mean it’s the best way, and Fumuro-ya encourages its employees to test out other approaches.

I’m really looking forward to seeing — and savoring — what new innovations they will cook up in the fu-ture.

Founded in 1865 at the end of the Edo period, Fumuro-ya has been led by sixth generation president, Yasuaki Fumuro, since 2005. The company operates 28 shops and restaurants in Kyoto, Tokyo, Osaka and other cities. Every dish on the restaurant menu features fu.

The tradition of Kagafu, the long-established “defense” and “attack” that will be inherited … Kanazawa / Fumuroya