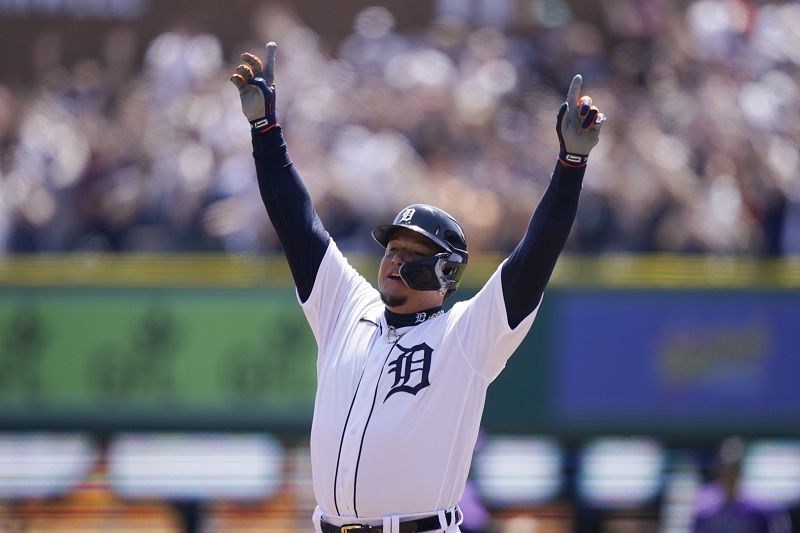 AP
Detroit Tigers designated hitter Miguel Cabrera reacts on first base after his 3,000th career hit during the first inning of the first baseball game of a doubleheader against the Colorado Rockies, Saturday, April 23, 2022, in Detroit.

No. 3,000 didn’t travel quite as far, at least not in distance. What this sharply grounded single did was elevate him even more among the greatest hitters in baseball history.

Cabrera needed only one at-bat Saturday to deliver his long-awaited milestone hit, quickly reaching the mark as the Detroit Tigers routed the Colorado Rockies 13-0 in the opener of a day-night doubleheader.

Cabrera became the 33rd player in major league history and first Venezuelan-born player to achieve the feat when he singled through the shift to right field. The hit came against fellow Venezuelan Antonio Senzatela and set off rousing cheers and chants at Comerica Park.

“When I saw the second baseman almost behind second base, I was like, ‘OK, you’ve got to shoot the ball that way,” he said.

Cabrera added a bases-loaded, two-run single in the sixth, then was pulled for a pinch-runner and drew another huge ovation as he trotted off.

He kept moving up the chart with a bloop single for hit No. 3,002 in the first inning of the nightcap.

Among those luminaries, only Cabrera, Aaron and Mays have a .300 career batting average.

“We just don’t know if we’re going to see another one in our baseball lifetime or our whole lifetime,” Detroit manager A.J. Hinch said. “It’s a small juncture of his Hall of Fame career. The next thing will be when he gets inducted a few years from now.”

Cabrera was the seventh Latino player reach the 3,000 mark. Pujols was the previous player to reach the mark, doing it in 2018.

Cabrera is the third player to get his 3,000th hit in a Tigers uniform, joining Ty Cobb and Al Kaline.

After getting his 2,999th career hit on Wednesday, he went 0 for 3 on Thursday. The Rockies-Tigers game scheduled for Friday night was rained out, putting history on hold for another day.

Cabrera fouled off the first pitch he saw and took a ball from Senzatela before his milestone swing.

He raised his right arm while heading to first base as right fielder Randal Grichuk retrieved the ball. The Comerica Park crowd of 37,566 roared and Rockies shortstop José Iglesias, who played with Cabrera on the Tigers, raced over to give his former teammate a big hug.

His current teammates then came streaming from the dugout to congratulate him before he went behind home plate to embrace his mother, wife, son and daughter on the field.

“I couldn’t imagine the pressure he was under to try to get a hit,” Grossman said of Cabrera. “I’m just so happy for him, his family and the country of Venezuela. It’s means so much more than just to us (his teammates).”