Butoh dance company Dairakudakan is celebrating its 50th anniversary this year. Founded in 1972, the company made a strong impression when it toured the United States and France in 1982. Since then, the company has traveled to many countries, such as Australia, South Korea and Brazil.

Many people are captivated by Dairakudakan once they watch the richly woven stage spectacles and mysterious butoh dancing performed by both men and women, their bodies painted all white.

“People who didn’t want to finish their career in the genre of theater or dance and who weren’t satisfied with the conventional way of performing on stage came together,” said Akaji Maro, the company’s founder and leader.

The company’s charm is the result of remaining innovative yet nostalgic, true to it’s original intentions. Elemental particles dancing, rebellious robots, a new breed of humans with insect brains, a drama woven by a virus — the company has made full use of large-scale dance ensembles and huge sets to stage performances that stretch the imagination. The company also makes the audience think about the state of mankind.

Before founding the company, Maro was a distinguished actor at a company led by Juro Kara, who represented the thriving underground theater scene. Maro was also fascinated by butoh, which was created by avant-garde dancer Tatsumi Hijikata, among others.

Butoh is a characteristically Japanese performing art. Dancers often perform naked, with their bodies painted all white. In their performance, the dancers move their bodies slowly while keeping their center of gravity low, expressing the roots of human existence, such as birth and death. Their dance even exposes ugliness, very different from Western dances, which tend to put an emphasis on the visual aspects of beauty. Butoh shocked choreographers and dancers, and became widely known overseas.

Maro did not acquire Hijikata’s butoh exactly, instead establishing the style of “Temptenshiki,” which means that being born into this world is a great talent in itself.

“If a dowdy man is lying down naked, isn’t it interesting in itself?” Maro said. “People all have great talents, and they are all interesting just being there. It’s desire for expression that gets in the way.” 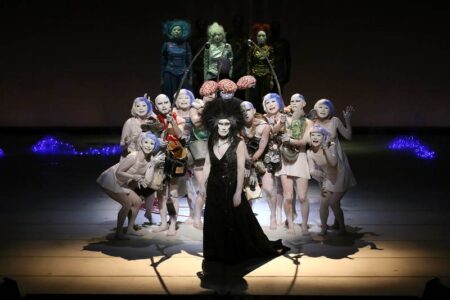 The “anyone is welcome” policy of the company has attracted people with a wide variety of distinct personalities and characters. One crew member, Ikko Tamura, was moved by a performance by Dairakudakan when he was a student of a top-level high school in Tokyo. He wanted to swiftly join “the other world” represented by the company. When he discussed his postgraduate plans with his schoolteacher, he told the teacher, “I want to paint my body all white and dance.”

Nonetheless, it is a strange-looking world at first glance. Naomi Muku, who took ballet lessons from childhood, met stiff opposition from her parents when she wanted to join the company. She also had hesitations about dancing half-naked at first, but she changed her mind when she painted her body all white.

“I can have a different persona, or become different being and then that seems more normal to me,” Muku said.

Being part of the company is stirring and inspiring. Takuya Muramatsu was an art student before becoming a member. He applied for an opportunity with the company as part of his soul-searching journey, but was shocked when Maro and senior members told him they didn’t need what was inside him, and to “empty his body.”

“It was the opposite of what I wanted to do. I was really surprised because what they told me was completely different from what I had been taught before,” he said.

To Maro, being driven to dance by something invisible is more important than making awkward expressions.

In 1980, the company held performances over a 12-month period at Toyotama Garan, the company’s rehearsal studio and regular theater. The company performed in the United States and France for the first time in 1982, and gave a one-month run of a show at an open-air theater in Kyoto in 1987. During the course of the company’s vigorous activities, Maro was diagnosed with cancer. He later called it a turning point in his career. The year was 1998, and he was 55. After having four-fifths of his stomach removed, he thought of his teacher Hijikata, who had died at the age of 57, and became aware of death.

The company subsequently gained strength. Members were encouraged to create their own works, which led to the births of high-quality productions that were staged overseas. Maro was eager to help the members.

Tamura developed his talent for choreography. He now creates many dance works with people all over the world based on local myths and legends.

“I always wonder how Mr. Maro will look at [the subject] and how he will make the work, and unwittingly try to emulate him,” Tamura said.

That is a wonderful teacher-student relationship, isn’t it?

“Well, I’m strongly inclined to think I’m just playing with them. You know I’d hate it if we became fanatic and looked like a cult,” Maro laughed heartily as he said this. 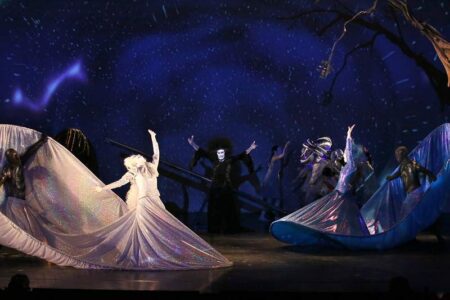 From Oct. 21 to 23, the company will stage “Butoh Tengu Geijutsu-ron” choreographed and directed by Tamura at Theater Tram in Tokyo. The production is based on a book on swordsmanship written during the Edo period (1603-1867).

“This is something written in the book, that something that has been uttered by someone who’s reached the extreme could be useful to everything. The book on swordsmanship is filled with clues for dancing!” Tamura said.

Lastly, The Yomiuri Shimbun asked them for their thoughts on the company’s centenary in 2072.

“Fluctuat nec mergitur!” Maro uttered a Latin motto written on the emblem on a coat of arms in the city of Paris. “It means ‘drift but not sink.’ I’ll never sink! I’ll keep on. I can continue making interesting works earnestly.”