Hit anime ‘The Boy and The Beast’ made into musical

“Bakemono no Ko” (“The Boy and The Beast”), the megahit 2015 animated film directed by Mamoru Hosoda, has been adapted for the stage as an original musical by the Shiki Theatre Company. The production, which delves into the friendship and rivalry of a parental-like relationship in the separate worlds of humans and beasts, premiered in late April.

The story is set in Jutengai, a town existing in parallel universe on the back side of Shibuya in Tokyo. The current Soshi, the title given to the leader of the ogres, monsters and other beasts living in the town, is retiring to be reborn as a deity. There are two candidates to become the next Soshi: the rowdy Kumatetsu and the graceful Iozen. While Iozen has many disciples, Kumatetsu has none and is ordered to take one, leading to him meeting a 9-year-old orphan called Ren.

Kumatetsu gives the human child the name Kyuta, and a father-son-like bond develops between them. Meanwhile, Iozen has a son who wants to follow in his father’s footsteps. The son is around same age as Kyuta and the two youths are torn by the emotional conflict over which world they are a part of.

Leading actors Junichiro Ito (Kumatetsu), Raiki Oshika (Ren / Kyuta), Han Song-Chi (Tatara) and Ryuji Ajikata (Hyakushubo) gathered for an interview with The Yomiuri Shimbun to discuss their characters and the show. Here are excerpts from that interview.

The Yomiuri Shimbun: Tell us about the character each of you play.

Ito: Kumatetsu is a free soul, with a boorish and insolent character. I hope the audience will see the connection between Kyuta and Kumatetsu and what influence Kumatetsu will have on Kyuta.

Oshika: Kyuta is a pure and guileless youngster, but with a strong inner will. He grows up with the support of those around him, including Kumatetsu, Tatara and Hyakushubo. I also take the stage with the idea of performing each character anew with support from senior actors.

Han: Tatara is a cynic, but he cozies up to Kumatetsu. He sticks with Kumatetsu because he finds it fun watching a guy who has no hesitation doing things he himself would hold back doing.

Ajikata: Hyakushubo is a monk, but he admires some aspects of the lifestyle of Kumatetsu and Kyuta. He gets peace of mind being with them. I think he has affection for Kyuta because he feels as if he’s looking at Kumatetsu in his youth. 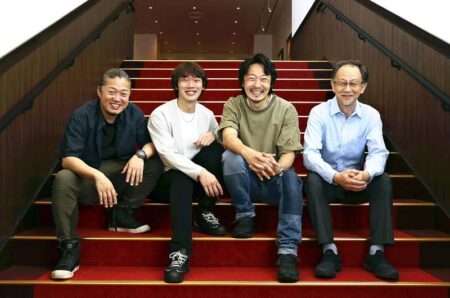 Q: What should we look out for?

Ito: The contrast between two relationships — the one between Kumatetsu and Kyuta, and the other between Kyuta and Iozen’s son Ichirohiko — is what the audience wants to see most, and is the most visible aspect of the story. But I also want people to definitely pay attention to Kumatetsu’s friendship with Tatara and Hyakushubo. It can be felt in a scene toward the end in which Kumatetsu makes a certain decision and the other two support him.

Oshika: I like the scene in which Kyuta wonders what is the “sword of the heart” that Kumatetsu has talked about, and where he thinks, “What is the real me?” I also suddenly wonder, “What is the real me?” after a rehearsal, so I think it’d be nice if the audience will also look at themselves through this production and think what is important to them.

Ajikata: The scriptwriter Chikae Takahashi had Ichirohiko appear more than in the animated film. Like Kyuta, Ichirohiko anguishes over his own identity. What will become of Ichirohiko? Please watch to find out.

Han: Familial love, identity, friendship … there are so many themes to sate any theatrical appetite. Maybe you can say the whole show is a highlight.

Q: Can you let us in on some untold stories about the production?

Ito: There is a scene at the end in which Kyuta and I strike poses with swords. The two of us came up with that! When I did the scene with Raiki [Oshika], the director Go Aoki said, “We’ll go with that,” and it was kept in.

Han: And the way we line up during the curtain call. It’s the same as in the poster for the animated film. I hope the audience will realize it’s not just Tatara trying to look cool (laughs).

The performances are scheduled through Dec. 30 at JR East Shiki Theatre Aki in Hamamatsucho, Tokyo.

As of July 27, the performances until July 30 are canceled.

The production features the first-ever use of two turntables onstage by the Shiki company. The machinery involves concentric stages, an inner and outer, that revolve separately.

By rotating each turntable as required, the production achieves smooth scene changes and can display two scenes simultaneously. 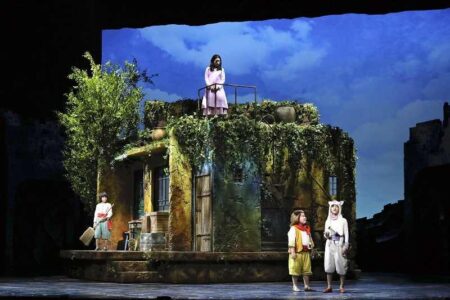 The Yomiuri Shimbun
Kumatetsu’s house sits on the inner of the two stage turntables.

For example, the scene can make a natural switch from the soft colored Jutengai to cold, metallic Shibuya. It can allow us to be in Kumatetsu’s house and a Shibuya library at the same time.

Stage hands do the heavy work for the scene changes. According to stage director Yuta Yatake, there are about 20 more staff members handling large props than for other productions.

He said that the staff change their costumes like the actors, such as in wearing sanitation worker uniforms, or all black, depending on the scene, to keep themselves from being noticeable on stage.

One mask per character

Each of the beasts in Jutengai has an animal motif — Kumatetsu looks like a bear, while Iozen has a boar’s face and lion’s mane. Kumatetsu and the other main characters have special makeup, but residents of the town wear masks that are elaborately designed, from the hair down to the wrinkles. You can see how each is different.

The costumes are custom-ordered starting from the weaving process. The fabrics were given a hand-woven texture, with yarn or ribbons sewn on and patterns printed on.

Soshi’s costumes are characterized by patterns that remind Japanese people of offerings to a deity or Buddha, such as peaches, lotus flowers and sea bream. According to costume director Ayaka Sato, Soshi’s costumes are made using a traditional needlework technique that can be seen in decorative hagoita paddles, for example. 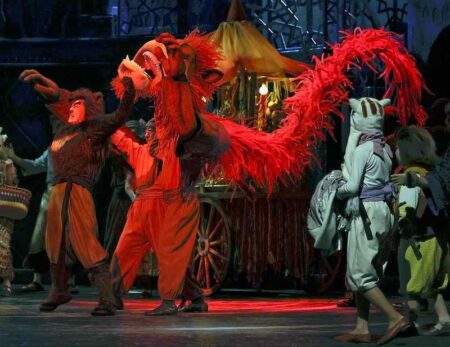 Another must-see are the giant puppets designed by Toby Olie, a London-based director-designer-puppeteer. His puppets appear in the scene with the fight between Kumatetsu and Iozen to decide the new Soshi, and require three people each to operate.

And the puppet that appears in the climactic scene will undoubtedly wow the audience not just by its sheer size, but also with its construction and movement.