Mario Kuroba is playing a key character in a new musical based on the megahit manga series “Rurouni Kenshin” at a Tokyo theater.

Titled “Rurouni Kenshin Kyoto-hen,” the musical set in Kyoto is an adaptation of a popular episode from “Rurouni Kenshin — Meiji Kenkaku Romantan,” itself an alternative story from the series.

Kuroba plays Makoto Shishio, the rival of the protagonist, Kenshin Himura. Portraying Shishio is a huge challenge for Kuroba because he cannot use facial expressions to depict the swordsman, whose whole body is bandaged to cover his burns. So how does he tackle it?

“I like the original manga and have read the entire series,” Kuroba said. “I’ve always had an unquenchable fire in my belly to play Makoto Shishio and I held on to my wish to do so someday.”

The musical, originally scheduled for 2020, was canceled because of the coronavirus pandemic. Kuroba sounded excited about finally getting to play the character on stage.

The lead character Kenshin is a swordsman who was feared as the most formidable assassin toward the end of the Edo period (1603-1867) — he was known as Hitokiri Battosai, which means manslayer. After the Meiji Restoration in 1868, he vowed not to kill anyone else and became a “ruronin,” or wandering samurai. In the musical, Shishio is an assassin who is the successor of Kenshin, but he is betrayed and nearly killed by the Meiji government. As he plots revenge against the government, he confronts Kenshin, played by Teppei Koike. 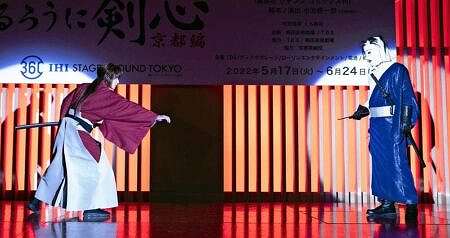 Shishio is depicted as having an “evil charisma” in the production.

“He has something that I don’t; he’s far away from me. It’s a tricky role,” Kuroba said.

Since Shishio is a man who has survived being burned alive, his whole body is bandaged like a mummy. It is a difficult part that demands great skill from the actor, to overcome the lack of facial expressions.

“My abilities are being tested in this production. He is defeated by the times, rather than by Kenshin, and he dies. I’d like to carefully portray this charismatic character and the way he dies,” Kuroba said.

The musical is being staged at IHI Stage Around Tokyo in Toyosu, Tokyo. The theater boasts a 360-degree view from a revolving seating area surrounded by the stage. The audience can let themselves be absorbed into the world depicted on stage as well as on the screens around them.

Kuroba, who comes from Miyagi Prefecture, was born on July 6, 1993. In addition to theater, he is expanding into film and TV, making appearances in the film “Inakunare, Gunjo” (“Go Away, Ultramarine”) and the drama “Koi wa Tsuzukuyo Dokomademo” (An Incurable Case of Love).

When he was an elementary school student, he started playing baseball. He was so into the game that he wanted to get a baseball-related job. But an injury during junior high forced him to stop playing baseball in high school. He then started searching for things he could get enthusiastic about. At a friend’s recommendation, he tried his luck in the Junon Superboy Contest, a beauty competition for boys that is regarded as a gateway to the entertainment industry. Kuroba placed second in the competition.

“It turned out I couldn’t do anything, and I was just awful,” he recalled. There were times when he toyed with the idea of quitting, but he continued going on stage.

“The joy of expressing something, hearing from the audience who got what I meant, and the sense of achievement when giving my best — I became addicted to those things,” he said and laughed.

His name became widely known as a result of the musical “Touken Ranbu.” Like “The Prince of Tennis” musical, it is one of the so-called 2.5-jigen butai, or 2.5-dimensional stage works inspired by manga or video games. “Touken Ranbu” is based on a popular video game about famous historical samurai swords that are depicted as warriors. Among them is the elegant character Mikazuki Munechika, a role Kuroba played beautifully, shining as an actor in a leading role.

“I took part in the production from the onset, and I had the precious experience of improving together with the production,” said Kuroba, who went on to become one of the most popular actors of the 2.5-dimensional musical genre.

A recent musical adaptation of “Romeo and Juliet” gave him an opportunity to soar even higher as an actor. He played Romeo’s best friend Mercutio in 2019 and then played Romeo in a revival last year. The production was directed by Shuichiro Koike, who has directed many acclaimed musicals, including the current “Rurouni Kenshin,” for which he also wrote the script.

“The experienced cast of the ‘Romeo and Juliet’ production were all great actors. I keenly felt that only the skilled can survive in this field,” Kuroba said.

The actor worked hard day after day, not only honing his skills through lessons but also trying to learn from more experienced actors around him. In “Rurouni Kenshin,” he has to go on stage without one of his weapons — his good looks. That is actually what he wants.

“I think it’s a good opportunity for me if people coming to see the show tell me, ‘I couldn’t see your face but your acting was great,’” he said.

The result of Kuroba’s long-enduring efforts to play Shishio can be seen on stage until June 24.